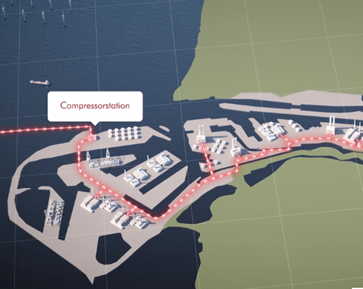 With PORTHOS (Port of Rotterdam CO2 Transport Hub and Storage) the Port of Rotterdam Authority, Gasunie and EBN are jointly making efforts to realise a basic infrastructure for the capture and transport of CO2 in Rotterdam’s port area. This CO2 can subsequently be stored in empty oil and gas fields in the North Sea seabed.

Various organisations, including IPCC, IEA and PBL, have identified CCS as a crucial tool for realising the Paris agreements on climate action. Certain sectors have insufficient renewable or circular alternatives at their disposal for the short-term reduction of CO2 emissions.

The point of departure for Gasunie, the Port Authority and EBN is a robust basic infrastructure for transport and storage (a ‘backbone’) that various companies can use to dispose of their CO2. Realising this loop pipeline (or ‘backbone’) and the associated storage infrastructure as a ‘collective facility’ will create significant economies of scale. This is also expected to have a favourable effect on the local business climate, since in the near future Rotterdam’s industrial production will have a smaller CO2 footprint than production at other locations.